It can be challenging to start a spin-out at a university and not all researchers decide to take up the challenge. But what are the benefits and advantages that lead academics to take the plunge? We spoke to Vertebrate Antibodies Limited, a spin-out of the University of Aberdeen, to discover their experience. 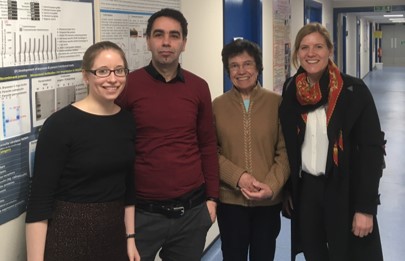 Ayham Alnabulsi joined the prestigious Scottish Fish Immunology Research Centre (SFIRC) at the University of Aberdeen in 2008, to work under leading immunologists Steve Bird and Christopher Secombes. The objective of the research was to develop an immunological model to help better understand the process of inflammation using zebrafish as a model. However, the palpable lack of antibodies and recombinants, at the time, to monitor immune responses, made the research process very difficult. Ayham saw this gap in the market and entered a blue-sky competition at the university, with an entry based on a technique for making animal antibodies. He was shortlisted and awarded second place. The following year, after incorporating feedback from the first competition and including his supervisors, Ayham entered another competition (commercialisation award) run by the University to support entrepreneurial ideas. He managed to secure the prize of £30K.

With this prize money, Ayham recruited Beatriz Cash, a researcher who had been at the University of Aberdeen since 1981 and had developed significant experience in producing antibodies. Together they focused on streamlining the antibody production process to make it commercially viable. As a result of this optimisation and, with support from Aberdeen University, Vertebrate Antibodies Limited (VAL) was founded in 2011 by Ayham Alnabulsi, Beatriz Cash, Steve Bird and Abdo Alnabulsi. The biggest challenge VAL faced, like many start-ups was in obtaining and maintaining a steady income and cash flow. With £25,000 initial investment, cost savings had to be made. VAL focused on using their investment to build up their product portfolio, creating a collection of antibodies. They rented a lab from the University of Aberdeen and acquired second-hand lab equipment. The marketing strategy employed by VAL was to partner with leading scientists and research institutes to promote their products through international meetings and peer-reviewed journals. This approach rapidly paid dividends and VAL secured multiple local grants (i.e. SMART-Scotland, KTP) and internationally grants through EU Horizon-2020 (ParaFishControl, VetBioNet).

The company operates at the interphase between industry and academia and enjoys the “the best of both worlds”. As collaborator and partner of multiple international consortia, VAL’s team work closely on many exciting research topics, absorbing knowledge and expertise from scientists and identifying commercial opportunities in the market. Working in a commercial domain means they “avoid the stress of applying for grants or submitting publications, whilst still doing research for VAL”. In addition, the commercial setting means the team can do more applied, rather than theoretical, research. This suits VAL’s team and provides a flexibility that is not possible otherwise in the industry.

Having now worked in industry and experienced the speed and flexibility it offers, both Ayham and Beatriz are incredibly supportive of the commercialisation of academic research;

“If research needs what you have created and the market doesn’t have it, why wouldn’t you commercialise? Commercialisation helps reduce the market gap and ultimately helps research, by making it easier for researchers to access these tools. I’ve heard so many stories of researchers losing valuable tools through broken freezers and fridge clear outs after academics retire, why wouldn’t you want to commercialise and safeguard your reagents for the future and help advance science?”

“I didn’t commercialise my antibodies until the end of the project after I had joined VAL. I wish I had done it sooner – it’s hard to change your mindset, but when you do, you realise the advantages of ensuring your research tools are available to other researchers.”

Since its inception in 2011, VAL has expanded with two Regis professors on their board as scientific advisors – Christopher Secombes and Graeme Murray. The core team has also grown to include Tiehui Wang (Director of Biologicals), an expert in recombinant technologies.

- Recombinant production platform with focus on future adjuvants and immunostimulants;

- AI software – identification of vaccine candidates and diagnostic markers and in silico immunogenicity mapping; and

- AI visual recognition software – identification of aberrant visual patterns which has many applications.

The University of Aberdeen has benefited too. Not only has it seen a return on its original investment as VAL has grown, it also has the benefit of a life sciences industrial partner. VAL works with different academic groups at the university to publish papers, train students and provide reagents for research.

VAL’s future growth and success is partly due to its industry collaborations. Having grown organically and slowly added divisions by getting the best people on board, VAL has generated interest and funding from a private investment group. With the support of their legal and accounting team, VAL has been able to focus on what it does best – making innovative and novel reagents.

However, its oldest industry collaboration is with Ximbio. VAL was one of Ximbio’s first industry collaborations and over the years they have evolved together. For Ayham and VAL, “Ximbio has been a great industry partner. Ximbio takes the weight of reagent marketing, shipping and fulfilling contracts from VAL”. In addition, in VAL’s eyes, “companies have to meet a certain standard to be listed on Ximbio’s portfolio. Unlike other reagent promoters, Ximbio displays our logo alongside our products, providing us with visibility in the market”.

VAL has a number of reagents listed on Ximbio’s portfolio and more are added on a regular basis. Explore their reagents on the portfolio.